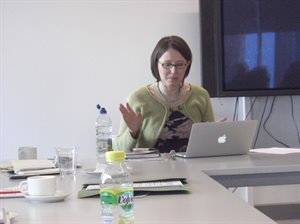 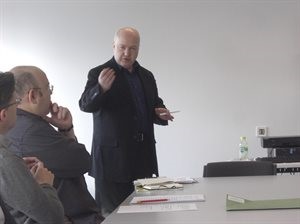 This symposium was a small-group event at which a range of TV scholars were invited to discuss television drama and canon formation, researching television drama in Scotland, Wales, Northern Ireland and the English regions and the general problems relating to research into ‘forgotten’ television drama. Lez Cooke’s reflections on the event may be found on the project blog. Hosted by the Department of Media Arts, Royal Holloway, University of London, in association with the Centre for Media Research, University of Ulster.

Revisiting the Canon: the Lost and the Forgotten Neil McCarthy stars as eighteenth-century satirist Jonathan Swift in an experimental play which sees the cleric pitted against a modern-day television interviewer (David Mahlowe). Thought lost until 2011, this programme is believed to be the earliest surviving television drama emanating from Northern Ireland. Originally broadcast as a special one-off episode of Flashpoint, UTV’s nightly current affairs series, it is sourced from a slightly edited telerecording negative produced for overseas sales.

10-12.30 Researching the History of Scottish and Welsh Television Drama